Exploring the Science of Yoga Nidra

What people who practice Yoga Nidra on a regular basis probably know intuitively, has been the subject of a growing number of scientific studies: the benefits of Yoga Nidra on our bodies and minds.

What is Yoga Nidra?

Yoga Nidra is sometimes referred to as "the yogic sleep“ and research suggests that a 30-minute practice of Yoga Nidra can equal 4 hours of deep sleep in its restorative effect on the nervous system. It is also an excellent tool to speed up recovery and is very helpful in coping with stress.

This might sound too good to be true, so let’s take a closer look to see what different research groups have actually measured and how they have come to the conclusion that Yoga Nidra really is a powerful tool to keep us healthy and happy!

Why is this finding important? Alpha brainwaves are linked to the brain being in a relaxed, yet fully aware and awakened state (Lagopoulos et al., 2009). Increased alpha activity is associated with the ability to be focused on the present moment, it boosts creativity and decreases symptoms of depression and anxiety.

2. Yoga Nidra does not only have powerful effects on the activities of our brain waves, but according to Rani et al. (2011), it can lead to significant improvements in patients with menstrual disorders. A group of 75 females with menstrual disorders like severe pain symptoms and cramps, gastro intestinal, cardio-vascular symptoms and cycle irregularities were included in the study and randomly received either standard treatment or standard treatment plus a Yoga Nidra intervention. After six months, the Yoga Nidra group significantly improved across all symptoms, compared to the control group.

Why is this finding important? It goes without saying that suffering from intense menstrual discomfort for some days each month, twelve months a year for more than 30 years of your life is no fun - safe and easy-to-apply treatments are definitely needed!

Now I invite you to do something good for yourself, it only takes 30 minutes! Join me as I guide you through a Yoga Nidra practice. I am happy to share with you the gift of divine deep relaxation - just sign up for my newsletter on the website and I’ll send you a free guided meditation! 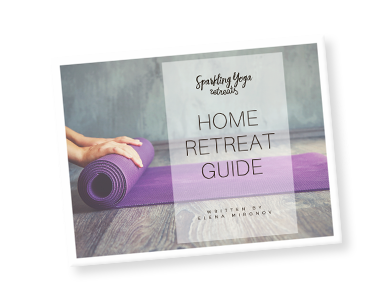